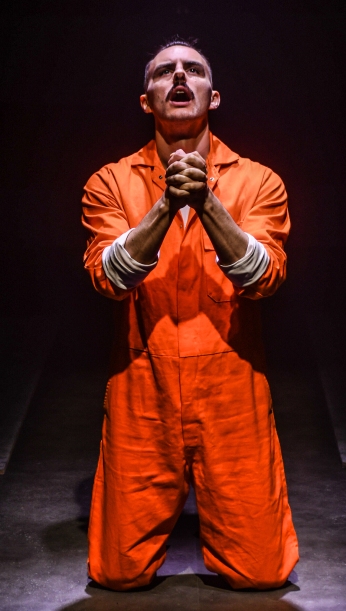 Two murderers confront each other from their respective cages in Rikers’ high-security prison yard, intermittently humiliated by a thuggish prison guard. Angel Cruz is full of angry self-righteousness, railing against the injustice of his incarceration. In contrast, Lucius Jenkins exudes a cheerful acceptance and inner peace which he claims to have found through God’s forgiveness – though he is fighting extradition to Florida, where he faces execution for his crimes. Meanwhile, Cruz’s principled and passionate lawyer is on a crusade of her own, sacrificing legality in pursuit of what she deems to be a morally more satisfactory conclusion. Pulitzer-prize winning writer, Stephen Adly Giurgis, explores issues of personal responsibility, faith and justice in this powerful, funny and unsettling play.

Spoiler alert: If you are intending to see this play – and you should – you might want to skip to the last couple of paragraphs.

It is a riveting watch. The dialogue is pacey, raw, profane, often hilarious and very, very sharp. Angel and Lucius are dream roles for good actors – and Danny Solomon (as Angel) and Faz Singhateh (as Lucius) are very good actors. They perfectly capture the contrasting inner worlds of their respective characters and both have brilliant comedic timing. Singhateh is especially (and chillingly) convincing as the amiable serial-killer. But what is particularly clever about the writing and the performances together is the way they manipulate the audience response.

Cruz is initially presented as a fairly unsympathetic character. He is rude, aggressive, arrogant. A few scenes later, however, we learn that Cruz’s crime was to shoot a fraudulent religious cult leader “in the ass”, having dedicated himself (unsuccessfully) to rescuing his kidnapped/brainwashed childhood friend. We begin to appreciate his sense of commitment and loyalty and to empathise with the deep frustration and anger that prompted his reckless act. It is hard not to share his outrage at the corruption of his victim (“How many sons of god do you know drive a Lexus?”) and the loss of his friend. Over the next few scenes – as the cult leader dies of unforeseen complications from his injury, and Cruz is systematically brutalised by other inmates, we are unequivocally on his side.

More shockingly, however, is the shift that takes place around our perceptions of Lucius. For at least a third of the play, Lucius is delightful – funny, genial and utterly likeable. He also exhibits compassion to Cruz, who has become tortured, terrified and defeated by his experiences in the prison cell. It is a huge shock, therefore, when Lucius casually describes his first murder – of a young boy – in graphic and savage detail. The horror of this moment is compounded by a visceral discomfort from having – for the previous 40-odd minutes – invested emotionally in the character. While squirming in my seat at the impact of this (and subsequent) revelations, I can’t help but admire the writer’s pacing of these disclosures as well as the charming characterisation of Lucius that had so effectively seduced me. And Lucius continues to be, in many respects, an interesting and sympathetic personality. Complexity can be an uncomfortable thing, and Giurgis marshalls it very effectively to challenge our view of evil as something straightforward, or easily spotted. As a witness to Lucius’s eventual execution says, with simple honesty and not a little bewilderment: “I liked him.”

The main thrust of the play, however, is a reflection on personal responsibility and redemption. And here it all gets a bit muddy. With great passion, conviction and lucidity, Lucius urges Cruz to take responsibility for his crime and to accept God’s forgiveness. Yet Lucius himself seems to take every opportunity to avoid accepting responsibility for his (at least) eight murders. Not only is the sincerity of his religious conversion a little suspect (or ‘convenient’ as Cruz puts it), he even uses it to shift blame onto God himself (“If God hadn’t intended these people to die …” ) Later, he attributes blame to his abusive childhood and un-treated mental health issues.

Watching the arguments go to and fro, I find it difficult to work out what Giurgis is ‘saying’ here – it feels both intellectually and morally confusing. And I wonder if he has thrown too much into the mix. In particular, the casual introduction of background factors to explain Lucius’s criminality seems to deflect the central argument into social criticism and dodge the very issue of personal responsibility that he wants to address. It also lets the audience off the hook – we can replace our uncomfortable dissonance about liking Lucius with a new-found sympathy for him. There is, of course, a very cogent and important argument to be made about the cycle of violence and the consequent inadequacies and inappropriateness of the penal system. But Giurgis does not develop this – the point is just dropped in en passant. I can’t help thinking that this particular play would be more interesting and effective as a study of evil and personal responsibility without diluting the focus and letting us off the moral hook by an under-explored social explanation.

These critical remarks are occasioned by the fact that Jesus Hopped the A Train has a strong intellectual and didactic feel. But it is also a powerfully emotional piece, played with terrific passion and vibrancy, and, at this level, it is a complete success. Jake Murray’s tight and focused direction accentuates the tension and the drama, and the performances are superb – leading to a final scene that is both horribly predictable and achingly sad. Louis Price’s set design perfectly contextualises the piece; the two cages are implied by hanging metal roofs and marbled square bases against the backdrop of a massive US flag with superimposed barbed wire. Excellent use of spots and stark white light conveys the harshness of a place where there is nowhere to hide.

Elysium TC is a new, northern-based theatre company, and Jesus Hopped the A Train is only its second production – the first being Days of Wine and Roses, which was nominated for a Manchester Theatre Award. Elysium’s mission is ‘to bring the best of world theatre to the North.’ This is obviously a worthy ambition – and, judging by this exhilarating and highly accomplished production, they are well on the way to achieving it.

2 thoughts on “Jesus Hopped the A Train: HOME”